With over 425,000+ third‒party apps officially available as on June 6th 2011, the Apple App Store enjoys the most number of downloads as compared to any other service in the category. These applications range from business to game, entertainment to educational, and many more available for free or for sale.

With a view to helping people get acquainted with some of the best business quotes and tips, OnTrack decided to develop a quotations app. Through this app, OnTrack also wished to make its presence felt on the world’s most renowned App Store.

Based on OnTrack’s requirements, Upside Learning developed a native app for the iPhone, iPad and iPod Touch called the Business Knowledge Centre App.

This integration between UpsideLMS and Upside2Go was possible since Upside2Go’s backend has been designed and developed as a plug–and–play module of UpsideLMS. This makes it is feasible for Upside2Go to run with or without UpsideLMS.

The app was developed using the Software Development Kit (SDK) for iPhone OS. The SDK allows developers running Mac OS X 10.5.4 or higher on an Intel Mac to create applications using Xcode that will natively run on the aforementioned Apple devices. Along with iPhone SDK, Objective C was also used.

Over 250 business quotes and tips were fed into the app which could be read one after the other by flipping through the pages. Facility was provided to bookmark quotes or add them to favorites. This ensured that the user could access the shortlisted quotes anytime easily without having to run through all the pages, thereby saving time. Further time saving was brought about by the search feature which allowed the users to search quotes by a particular keyword. ‘Visited’ section listed down the recently accessed quotes.

Having the Quotations app residing on the mobile device meant that the user could access the app anytime, anywhere depending on the need of the moment.

The Quotations app is available as a paid app on the App Store. 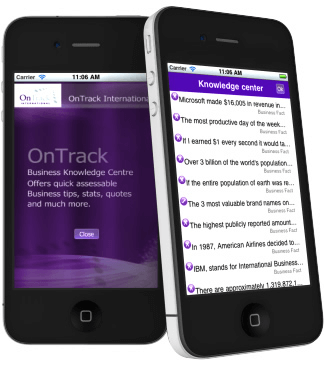 Specialising in designing and running in‒company training and development programs, OnTrack International is dedicated to optimising the effectiveness of people and businesses. Started as a family business over 20 years ago, it now has relationships with some of the biggest blue chip organisations and individuals on the global stage.

All the information provided above will be kept confidential.

Let's Have a Coffee Together